In June, the Agri Spray Drones (ASD) team used an Agras T-30 drone to whitewash greenhouse facilities for the University of Missouri, an application advancement that Greenhouse Facilities Manager, Michelle Brooks says turned a four-day job into a four-hour job. “The greenhouse facilities are rather old—just a standard glass greenhouse. In the past, we had used black fabric; we would get on the roof and pull it over every year, but a change in our liability insurance prevented our team from getting on the roof, so we had to look for a different option,” Clark says. “A couple of years ago, I switched over to a shade compound product, which works great, but we had to apply it standing on ladders, using an old, electric pesticide sprayer, and reach out onto the roof of the greenhouse. It was a four-day project to cover less than an acre of greenhouse rooftop space.”

Even application was hard to achieve, given the roof access limitations and wind gusts, also difficult, Brooks notes, was trying to reach the peak of the greenhouse.

Luckily for Clark, one of the greenhouse renters whose work involves fruit trees, put her in touch with Kit, ASD drone technician.

Kit mapped out the greenhouse area, set boundaries and returned a couple of weeks later for the actual application.

“The first day, when he mapped, Kit answered all of my questions and explained every step of what the process looked like,” Brooks shares and adds that even though this particular product was a first for the ASD team, Kit was able to walk her through the process and was confident that it would be successful because of the team’s experience with products of similar viscosity.

“The first pass they made, the mix didn’t seem to be coating very well and was drifting in the wind, but they tweaked the mixture, made a few adjustments, made two separate passes over the same greenhouse, and flew a little closer to the roof surface so we had less wind distortion. They put down a perfect layer that I was super happy with. I was grinning from ear to ear all day,” Brooks says with that same grin. “There’s another product that you have to apply to take it off, so I’m going to ask them to come back this fall.” 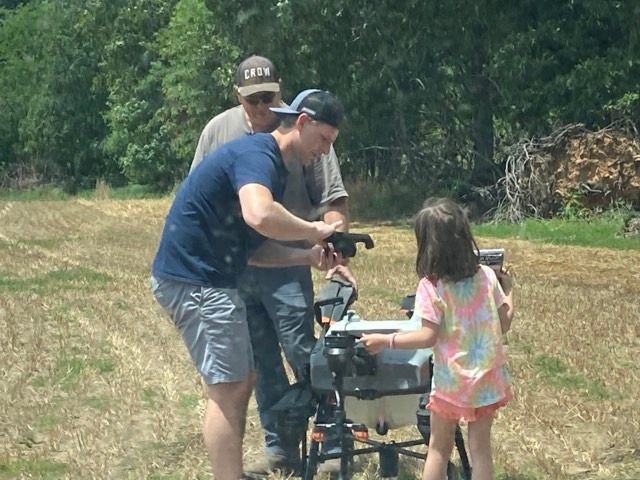